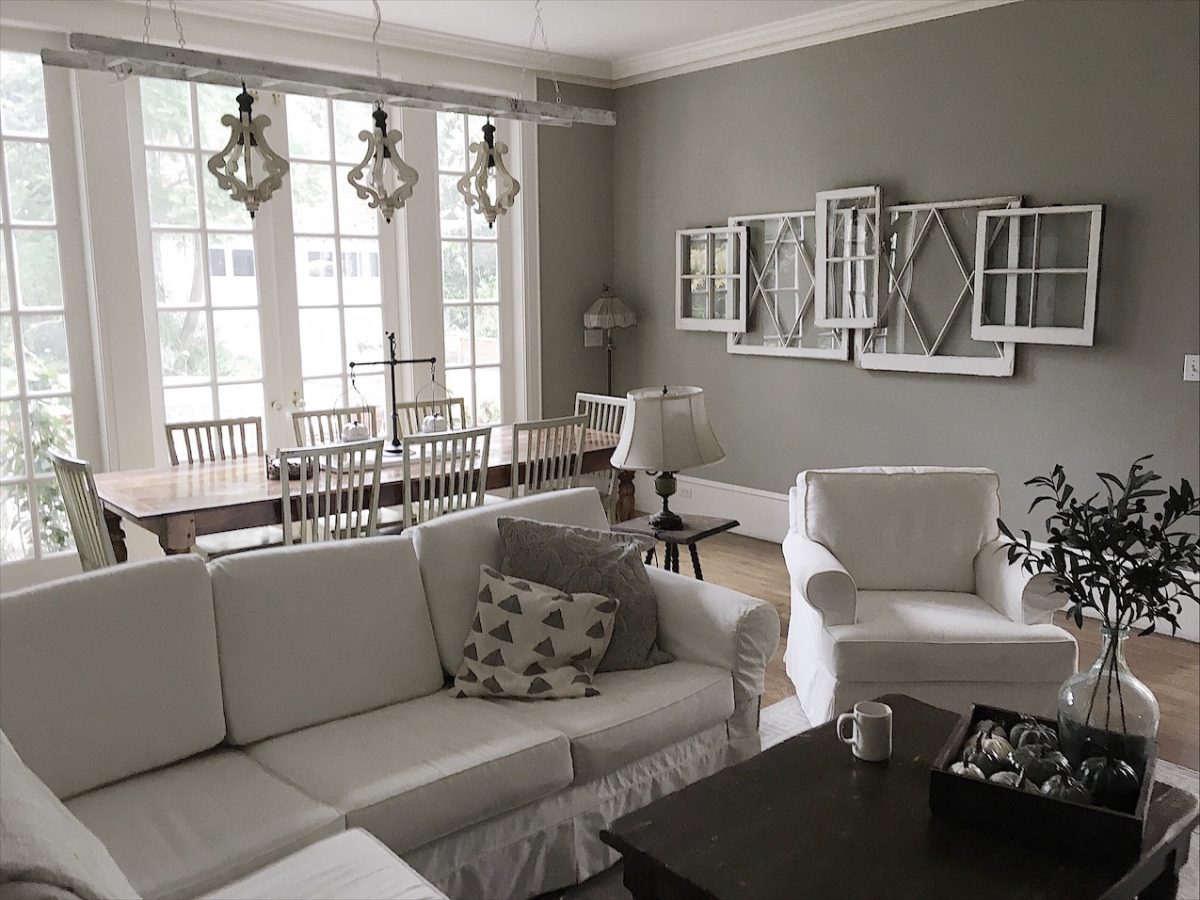 Every once in awhile I will see something on Instagram or Pinterest that just stops me in my tracks. When I saw the ladder chandelier that @lizmariegalvin put above her dining room table I was blown away. It was brilliant.

All year long I had thought I wanted to change the chandelier above our dining table in the family room. I always thought I would just replace it with another single chandelier until the day @decorsteals offered their shabby chic distressed white wood chandeliers. They were so well priced that I ordered one. And then it hit me. These were perfect for a ladder chandelier! So I ordered two more.

I found a ten-foot ladder @vintagejunktionla that was old and wonderful and got it to work.

The first thing I realized is my ladder had to have an odd number of sections. The center chandelier that hangs from the wall goes through the center section. Then I needed three more sections on each side. The ladder I bought had eight section so I needed to cut one off. 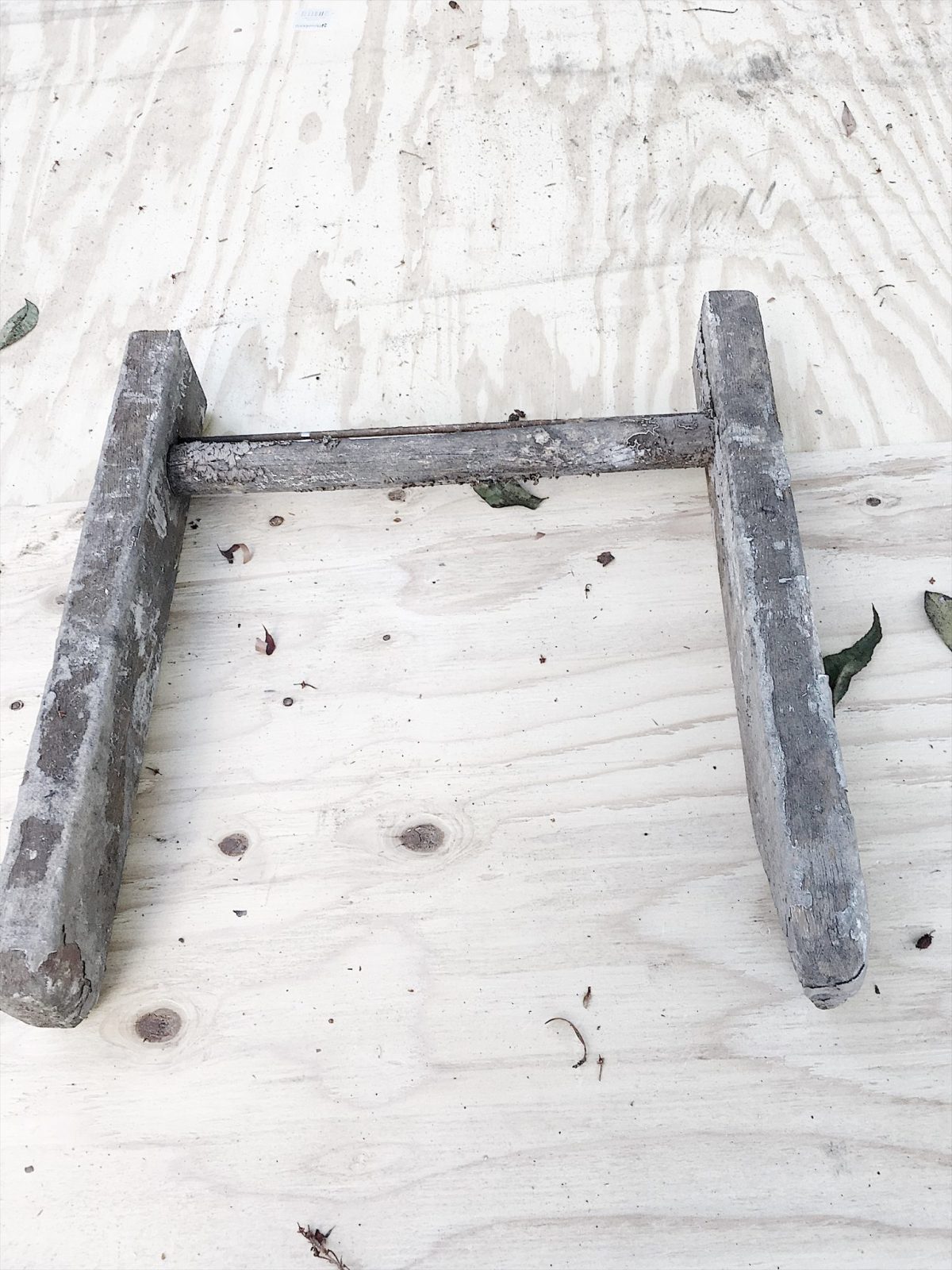 Then I painted the ladder with Milk Paint I purchased at Hobby Lobby. I used one and a half small cans. 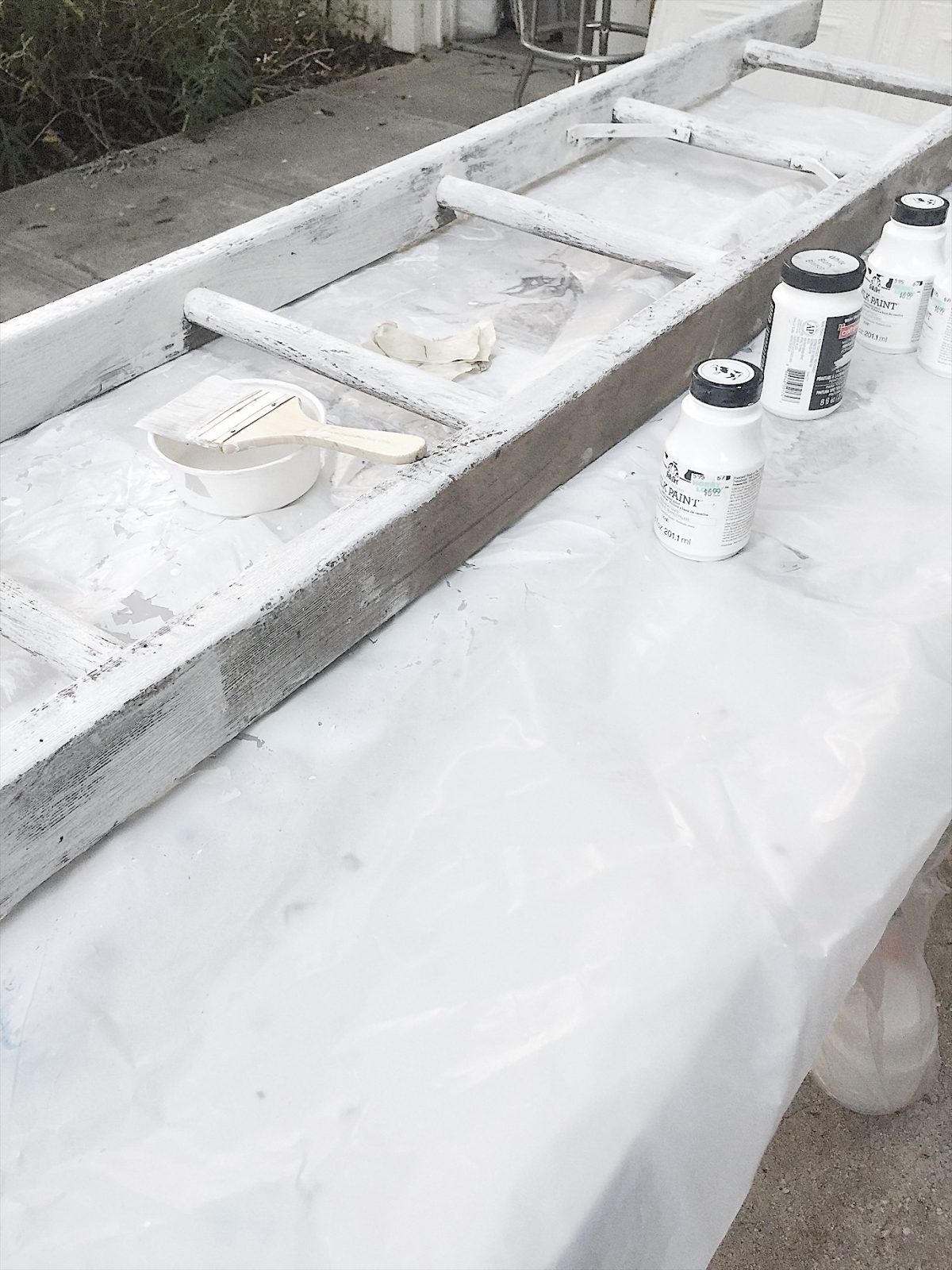 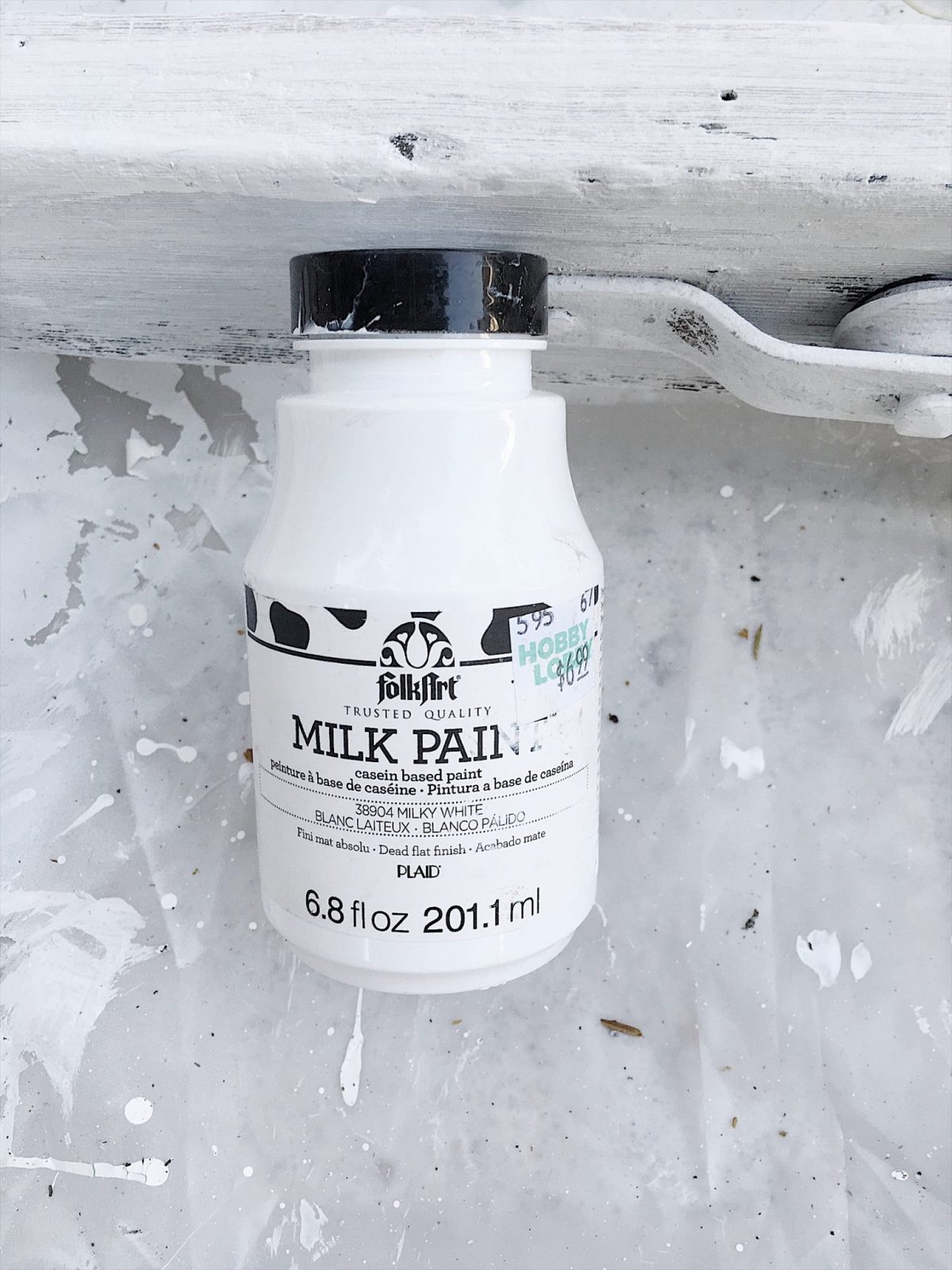 I painted the ladder with two coats but didn’t try to get it perfect because I wanted a shabby look to match the chandeliers. 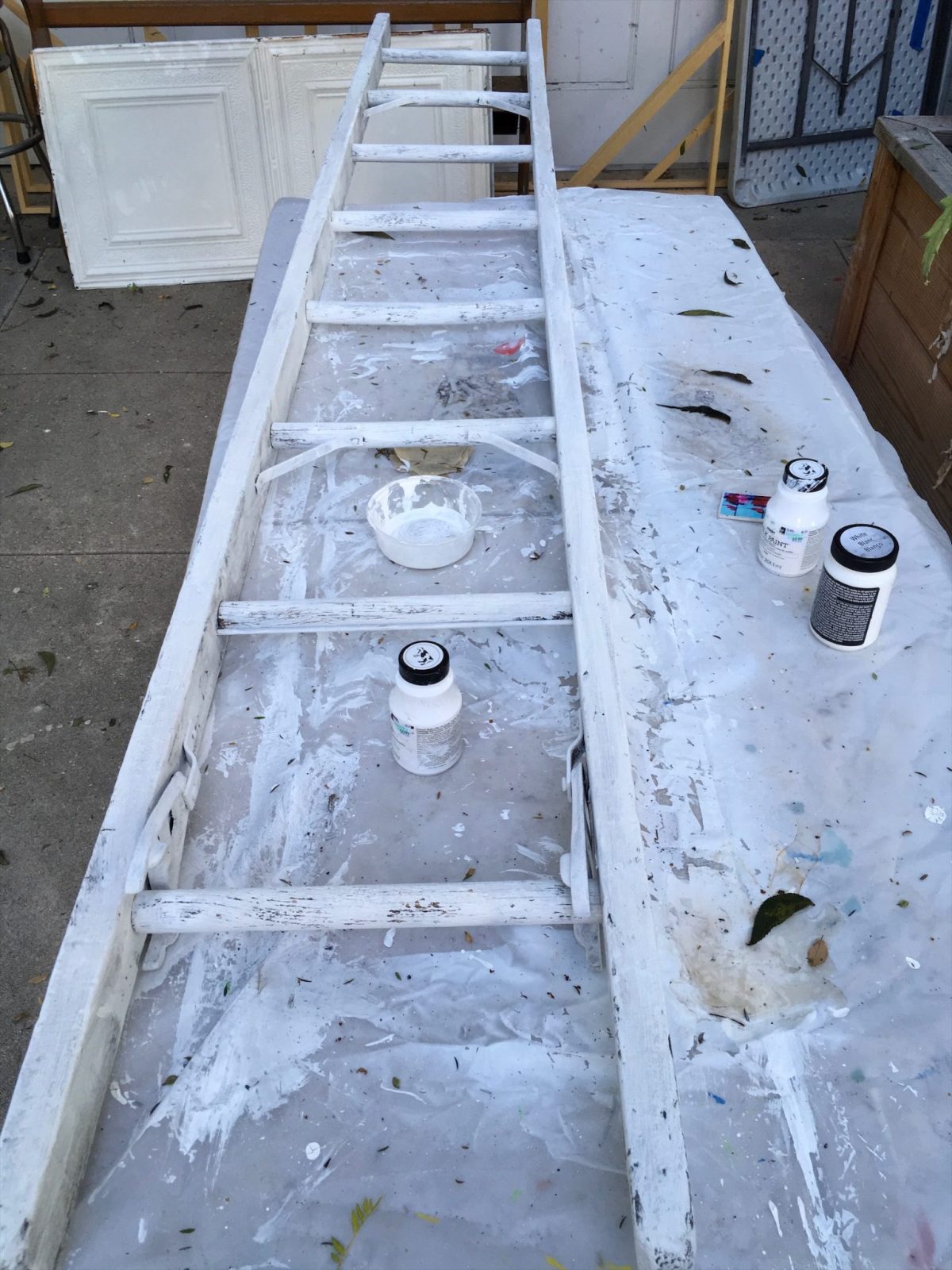 I also painted the dark brown chain with the milk paint. That looked chippy too. (Don’t worry about painting the wire as that gets painted after it is hung.) 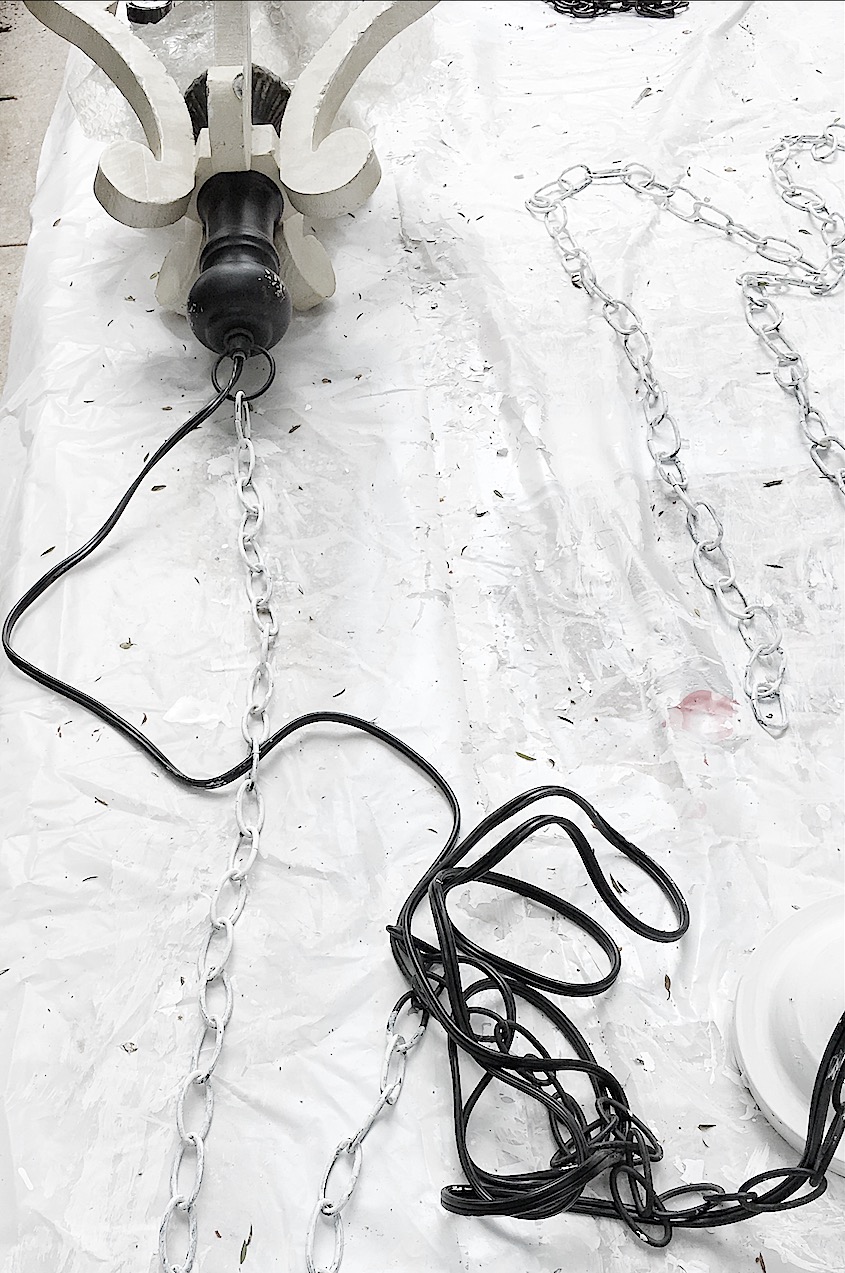 We added two metal rods to the ladder where the two outside chandeliers would hang. That was easy. Then we put two hooks in the ceiling to hold the chains. It’s important to try to find studs in the ceiling.

Next, we hung the ladder. This was WAY harder than I thought it would be. I didn’t even think about the fact that because the ladder was really old it might not be straight. And it was not even close to being straight! So we took the ladder down and tried to bend it, but of course, that didn’t work. I finally added one more chain link to the left side and it fixed it perfectly. 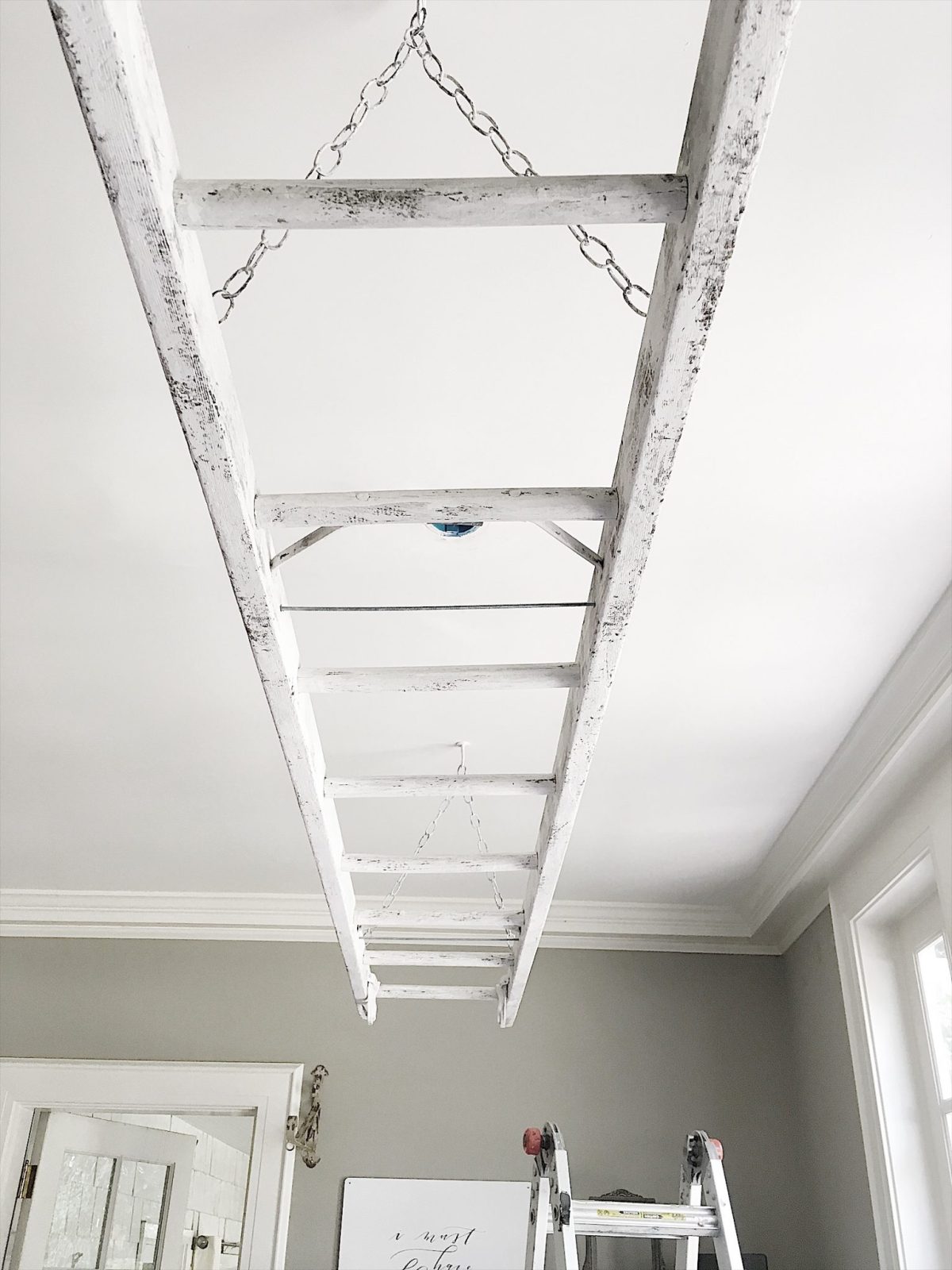 Next, we hung the two side chandeliers at the desired height. (Trust me, you want to hang these first.) 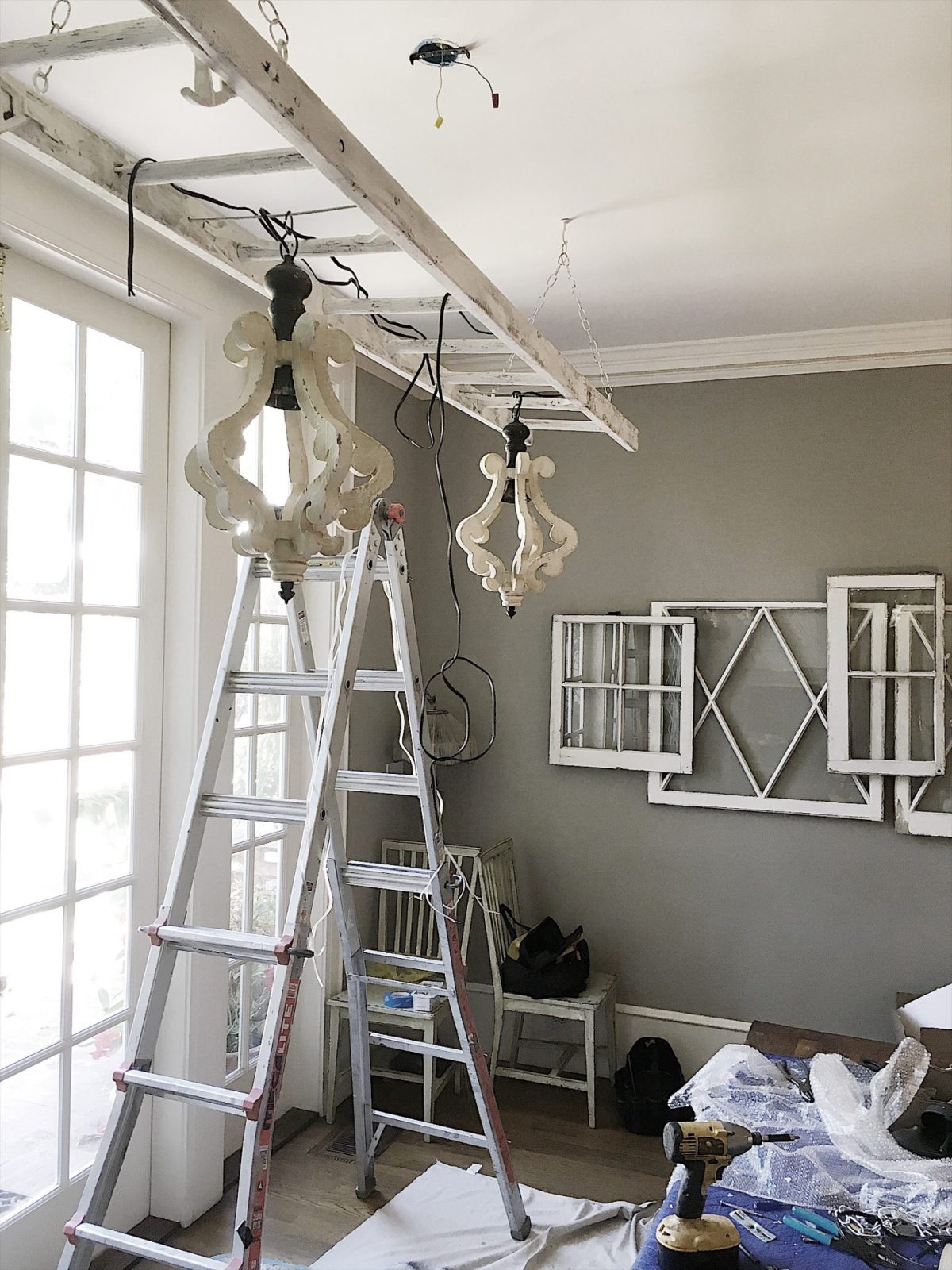 We decided to run the wires from the two outside chandeliers along the inside of the ladder and then up the center wire of the chandelier hanging from the ceiling. 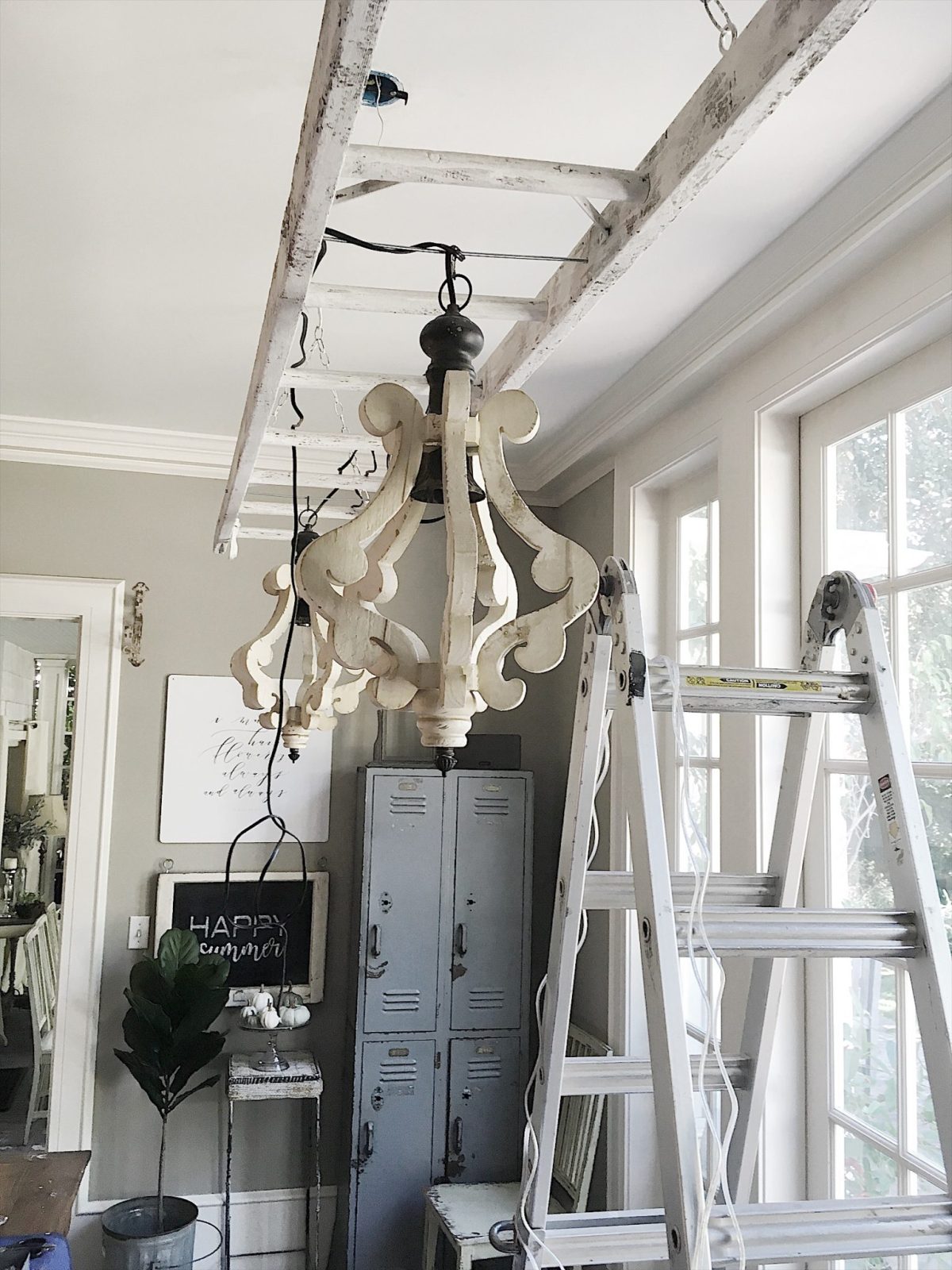 Then we hung the center chandelier. 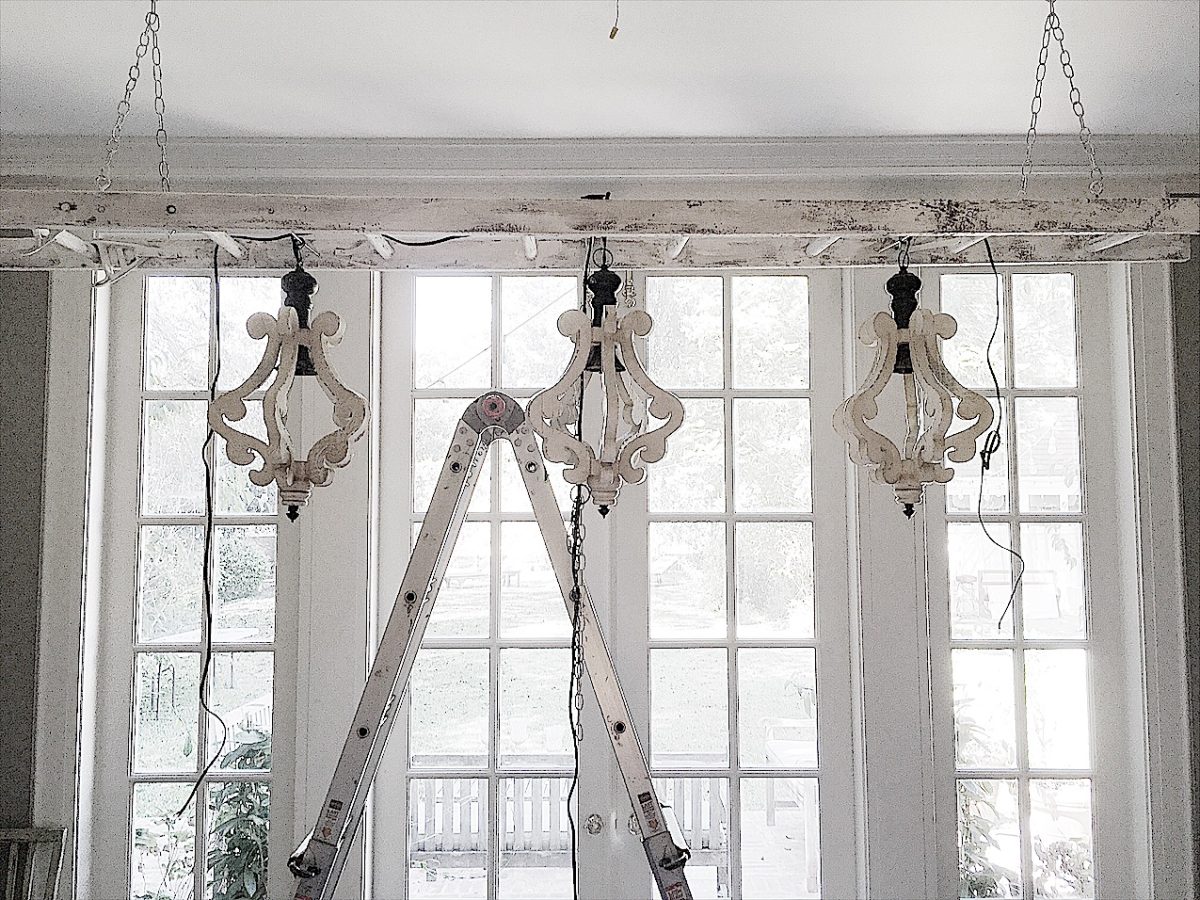 First, we got the height right so it matched the other two chandeliers. We did this by placing a metal rod on top of the ladder to hold it temporarily in place. Then we threaded all three wires from the three chandeliers up the center chain and into the ceiling. 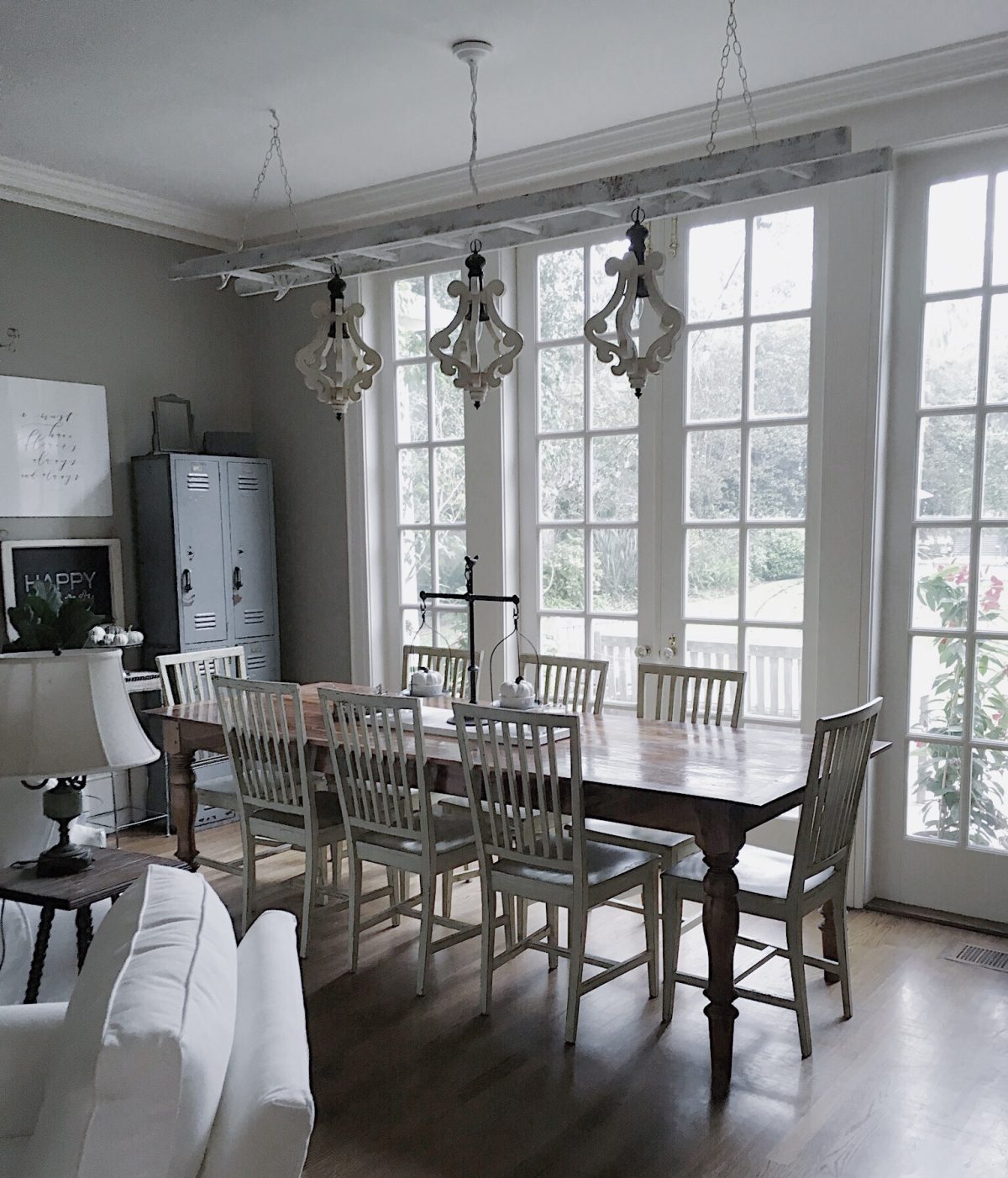 Finally, I painted all of the wires with the milk paint. Note to self, don’t let your dog sit under the ladder unless you don’t mind having a paint-splattered dog.

The project took a full day and a half but it was worth every second. I can’t even express how much I love this! Thank you, Liz Marie, for your inspiration. Be sure to check out her feed @lizmariegalvin.

3 thoughts on “MAKE IT YOURSELF // My Ladder Chandelier”

My 100 Year Old Home may sometimes use affiliate links, which means a small commission is earned if you make a purchase via the link. The price you pay will be the same whether you use the affiliate link or go directly to the vendor’s website using a non-affiliate link.